Agrimony is called XIAN HE CAO in Chinese herbal medicine and is used to stop bleeding. - Dr. Michael Tierrra L.Ac., O.M.D., The Way of Chinese Herbs

Agrimony herb is not commonly used today, but has its place in traditional herbalism. This herb is safe in moderation for most healthy people. Recent studies show that Agrimony has anti-oxidant, anti-inflammatory, hepa-protective, and neuro-protective properties. More study is needed to establish usage guidelines. Agrimony is considered very safe and makes a tasty herbal tea.

The following information is based on historical uses found in herbal lore. There is insufficient research on this herb to scientifically prove any medical benefits in humans.

Agrimony herb contains tannin and a volatile essential oil. As Agrimony also possesses an astringent action, it is frequently used as an herbal mouthwash and gargle ingredient, and is applied externally in the form of a lotion to minor sores and ulcers. Agrimony has also been recommended, as a strong decoction, to cure sores, blemishes, and pimples.

Caution: Agrimony is an astringent herb, do not use if constipated. Do not use internally during pregnancy without discussing with your obstetrician.

Agrimony can be found growing extensively throughout Europe, Canada, and the United States. A hardy perennial, its natural habitat is woods and fields, but it takes to cultivation easily. Agrimonies have one to two foot branched stems covered with a fine, silky down and terminate in spikes of yellow flowers. Both the flowers and the notched leaves give off a faint characteristic lemony scent when crushed. After the flowers fade they give place to tiny clinging "burrs" which will quickly adhere to your clothing if you brush by an it plant in a hedgerow.

How to grow Agrimony

For garden growing, give Agrimony sun or partial sun and regular watering, a plant from seed or propagate by root division in spring or fall. Gather the herb in summer while the flowers are in bloom. 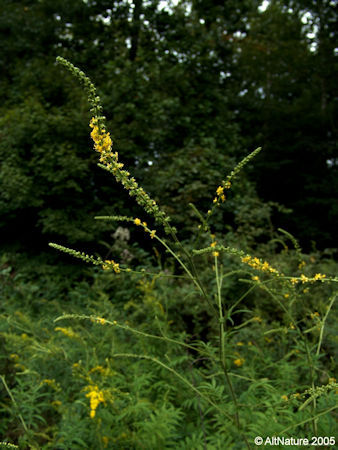 Agrimony is usually common enough to harvest freely in the wild, (not so for the small woodland species) as long as you take only a small portion from any given area. Tie in small bundles and hang in a dark, dry place for a few days to a week depending on temperature. Or place small amounts in large paper bags. Dry herbs in well ventilated areas away from smoke, pets, and rodents. Harvest Agrimony seeds in late summer or early fall, and plant right away or store in freezer. (Continued below)

Witches used Agrimony in spells to dispel negative energies, and to ward off hexes.  Agrimony was said to cause a deep sleep. When placed beneath a mans head this sleep would last until it was removed.

This passage is from an old English medical manuscript:

"If it be leyd under mann’s heed,
He shal sleepyn as he were deed;
He shal never drede ne wakyn
Till fro under his heed it be takyn"’

Agrimony Herb Tea: Infuse 1 teaspoon dried Agrimony root, leaves, or flowers in 1 cup of boiling water for 15 minutes. Strain and flavor with honey and a little licorice root if desired. Take up to 1 cup per day. Said to be a good blood purifier.

Homeopathic Remedy for:  "The jovial, cheerful, humorous people who love peace and are distressed by argument or quarrel, to avoid which they will agree to give up much. Though generally they have troubles and are tormented and restless and worried in mind or in body, they hide their cares behind their humour and jesting and are considered very good friends to know. They often take alcohol or drugs in excess, to stimulate themselves and help themselves bear their trials with cheerfulness."

Inhibition of hepatitis B virus by an aqueous extract of Agrimonia eupatoria L.

Extracts of Agrimonia eupatoria L. as sources of biologically active compounds and evaluation of their antioxidant, antimicrobial, and antibiofilm activities.

- Alma Hutchins
The Ultimate Book of Herbs and Herb Gardening