Mullein has been used in traditional herbal medicine for centuries.

Mullein first appears in late fall and winter as a somewhat large rosette of light green, fuzzy oval leaves that usually survive the coldest of winters. It can be found growing wild almost anywhere in sunny or part shade areas.

By late spring, a large flower stalk emerges from the center. In medieval times, the flower heads were dipped in wax and used as torches.

Mullein leaves can be harvested almost year-round from the time the rosettes appear in late fall, until it goes to seed in summer when the leaves will deteriorate.

Mullein flowers bloom a few at a time, so you can pick and set them to dry as they form. The flowers are soaked in olive oil for two weeks, then strained. You can use the infused oil for ear drops when there is pain in the ear or as a rub for sore muscles.

Mullein leaves are best known in herbal medicine as a remedy for relieving coughs. It is also said to have anti-bacterial and pain-relieving properties.

Mullein leaves are usually taken as an infusion but a tincture may also be used. When making a tincture with mullein leaves, use half as much dried herb as you would most plants. The dried leaves of Mullein swell more than most alcohol due to their bulk from the fuzziness of the plant. The leaves will blacken if they swell and don’t stay completely covered with alcohol. Whichever method you might use, be sure to strain the mixture so the little hairs don’t get caught it your throat.

Mullein leaves and flowers can also be incorporated into a home-made cough syrup (see syrup recipe on the Violets page.) Some people choose to smoke the leaves to relieve congestions, but perhaps putting some in hot water and inhaling the steam might be a healthier option. 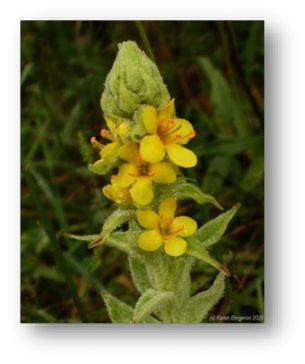 If you are really in a bind, Mullein’s soft fuzzy leaves are said be a substitute for toilet paper, however some say it can be irritating. The leaves close to the center are much softer than the rough, older leaves

In many countries throughout the world, the value of Mullein as a proven medicinal herb is now backed by scientific evidence. Some valuable constituents contained in Mullein are Coumarin and Hesperidin, which exhibit many healing abilities. Research indicates some of the uses as an analgesic, antihistaminic, anti-inflammatory, anticancer, antioxidant, antiviral, bacteristatic, cardio-depressant, estrogenic, fungicide, hypnotic, sedative and pesticide are valid.

An infusion of Mullein leaf is taken internally in the treatment of a wide range of chest complaints and also to treat diarrhea and bleeding of the lungs and bowels. The leaves, root, and the flowers are anodyne, anti-inflammatory, antiseptic, antispasmodic, astringent, demulcent, diuretic, emollient, expectorant, nervine, and vulnerary.

Mullein oil is a very medicinal and valuable destroyer of disease germs. An infusion of the flowers in olive oil is used for earache drops, or as a local application in the treatment of piles and other mucous membrane inflammations. Mullein infusion is considered a strong antibacterial by herbalists. The oil being used to treat gum and mouth ulcers is very effective. A decoction of Mullein root is used to alleviate toothache and also relieve cramps and convulsions. It is also used in alternative medicine for the treatment of migraine headaches accompanied with oppression of the ear.

The whole Mullein plant possesses slightly sedative and narcotic properties. Mullein seeds are considered toxic. They have been historically used as a narcotic and also contain saponins.

The dried leaves are sometimes smoked to relieve the irritation of the respiratory mucus membranes, and the hacking cough of consumption. They can be employed with equal benefit when made into cigarettes, for asthma and spasmodic coughs in general. Externally, a medicinal poultice of the leaves is applied to sunburn, ulcers, tumors and piles.

Mullein Habitat- Where to Find Mullein

Mullein is an alien, naturalized, biennial herb. It is now a widely distributed plant, being found all over Europe and in temperate Asia as far as the Himalayas, and in North America it is exceedingly abundant. Great Mullein is found growing on hedge-banks, by roadsides and on waste ground, most often on gravel, sand or chalk. It can also be found in sunny positions in uncultivated fields and especially on dry soils.

How to Identify Mullein Herb

Mullein forms a rosette of numerous, large leaves, 6 to 15 inches long and up to 5 inches broad, (first season) at the base of the stem but become smaller as they ascend the stem, on which they are arranged on alternate sides. They are whitish with a soft, dense mass of hairs on both sides, which make them feel very furry and thick. The root is a long taproot with a fibrous outer cover and fleshy inside. The flower-spike (second season) has been known to attain a height of 7 or 8 feet, covered with densely crowded, sulphur-yellow, flowers about an inch across with five rounded petals. Blooming during July and August.

How to Grow Mullein Herb

Great Mullein is an easily grown medicinal plant, it succeeds in most well-drained soils, including dry ones, and prefers a sunny position. It dislikes shade and wet soils. Scatter Mullein seeds when ripe in late summer and fall.

How to Use Mullein

Harvest the entire Mullein plant when in bloom and dry for later herb use. Dry flowers and infuse in olive oil. You may want to strain herbal infusions of Mullein before drinking to remove the fine hairs.

Tea: An aromatic tea can be made by boiling 1 tbs. dried leaves or root, in 1 cup water for 5 - 10 min. A sweeter tea can be made by infusing the fresh or dried flowers. For children and the elderly, use milk instead of water. Sweeten if desired.

Mullein oil: Use flowers or root. Place in blender or crush, fill jar, cover with olive oil, set in warm place for 2 weeks. Strain before use.

Mullein is also used for : Dye, Insecticide, Insulation, Lighting, Tinder, Wick. A yellow dye is made from Mullein flowers by boiling them in water. When used with dilute sulphuric acid they produce a rather permanent green dye, this becomes brown with the addition of alkali. An infusion of Mullein flowers is sometimes used to dye the hair a golden color. The leaves contain rotenone, which is used as an insecticide. The dried leaves are highly flammable and can be used to ignite a fire quickly , or as wick for candles.

An old superstition existed that witches used lamps and candles provided with wicks of Mullein in their incantations, and another of the plant’s many names, ’Hag’s Taper’, refers to this. Mullein was said to have the power of driving away evil spirits. Being a sure safeguard against evil spirits and magic, and from the ancient classics, it was Mullein which Ulysses took to protect himself against the wiles of Circe.