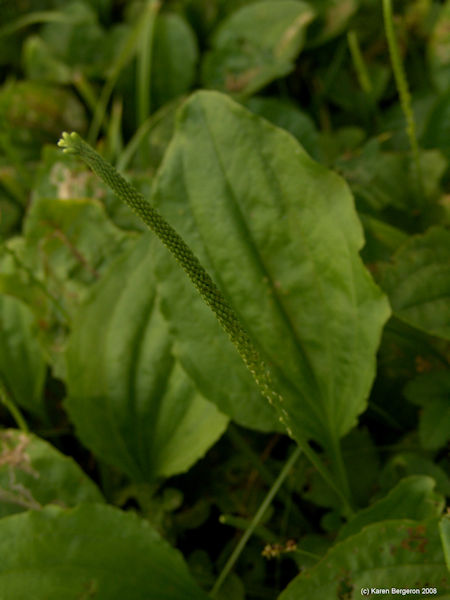 Plantain herb has a long history of use as an alternative medicine dating back to ancient times. Being used as a panacea (medicinal for everything) in some cultures, one American Indian name for the plant translates to "life medicine." It has been used for almost every ailment imaginable, from anxiety, bronchitis, constipation, high cholesterol, insect bites, smoking cessation, wound healing and more.

The young leaves of Plantain are edible raw in salad or cooked as a pot herb. They are very rich in vitamin B1 and Riboflavin.

Plantain is a perennial herb, thought to be of Eurasian origin and now naturalized throughout the world. Plantain is considered a common and noxious weed by some and a miracle plant by others.

Plantain is very easy to cultivate, it succeeds in any soil and prefers a sunny position, some forms have been selected for their ornamental value. It is an important food plant for the caterpillars of many species of butterflies. Plantain grows from a short, tough rootstock or rhizome, which has a large number of long, straight, yellowish roots, is a basal, rosette of large, broadly oval, dark green, leaves. The 4 to 10 inch long smooth, thick, strong and fibrous leaves have 3 to 7 or more ribbed veins, abruptly contracting into a long, petiole (leaf stalk) which is reddish at the base. The leaf margin is of Plantain is entire, or unevenly toothed. The flower stalks, are erect, long, slender, densely-flowered spikes. Each tiny flower is brownish and bell-shaped with four stamens and purple anthers. Flowers bloom most of the summer. The fruit is a two-celled capsule and containing four to sixteen seeds.

Native Americans carried powdered roots of Plantain as protection against snakebites or to ward off snakes. Plantain was called Englishman’s Foot or White Man’s Footprint, as it was said to grow where ever their feet touched the ground - this is referred to in Longfellow's ’Hiawatha.’. Some old European lore states that Plantain is effective for the bites of mad dogs, epilepsy, and leprosy. In the United States the plant was called ’Snake Weed,’ from a belief in its efficacy in cases of bites from venomous creatures.

Plantain Herbal Salve: In large non-metallic pan place 1lb. of entire Plantain plant chopped, and 1 cup lard, cover, cook down on low heat till all is mushy and green. Strain while hot, cool and use for burns, insect bites, rashes, and all sores. Note: Used as night cream for wrinkles.