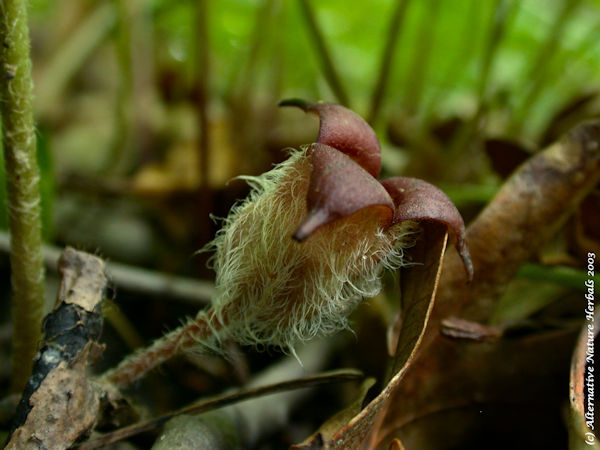 Wild Ginger is a native North American perennial found growing in moist rich soils in shady woodlands in Eastern N. America from New Brunswick to Kansas, south to N. Carolina and Tennessee. Prefers a rich moist neutral to acid soil in woodland or a shady position.


How to Grow Wild Ginger

Wild Ginger can be easily cultivated through seed or transplanted seedlings. It requires deep shade and likes the dampness of spring.

The large heart or kidney shaped leaves are hairy, dark green and deeply indented at the stem they grow in opposite pairs to a height of about 8 to 10 inches. The small maroon to brown, deep bowl shaped flowers grow at the base, between the leaf stems, it is single short stemmed and hairy outside and seems to split open into three outwardly folded petals, flowers bloom from March to May. The root is a long rhizome (underground stem), it is light green and tender or crispy, when crushed it has a strong antiseptic smell.

Wild Ginger contains the constituent aristolochic acid. Health Canada is advising consumers not to use products containing Aristolochic Acid, a naturally occurring toxin that can cause cancer, mutations in human cells, and end-stage kidney failure.

Dried root is burned as incense and is said to repel insects. The root and rhizome were slowly boiled in a small quantity of water for a long time and the resulting liquid taken as a contraceptive by the women of many American Indian tribes. A spray made from the decoction is a good deodorant and is handy in the first aid kit as an antiseptic. It is also used as an insecticide. A very strong decoction is used as a herbicide. Gather roots only (flowers and stems are not edible, said to be poisonous) in spring to late fall. Dry for later herb use.

One group of early American settlers (witch hunters) called Wild Ginger (wartchase) and believed witches used it to rid themselves of warts so they would not be recognized.

Aristolochic acid as a probable human cancer hazard in herbal remedies: a review

This page helps put Wild Ginger use and danger in perspective.

Unfortunately, we often see supplements that supply a level of concentration that is not "natural" and can be dangerous. Personally, I will avoid using Wild Ginger as a herbal remedy or food plant until I know more.