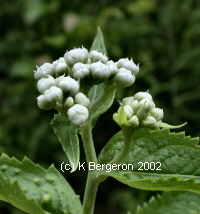 Wild Quinine is said to be a useful herb. It is used as an antiperiodic, emmenagogue, kidney, lithontripic, poultice. It has traditionally been used as an herbal remedy to treat debility, fatigue, respiratory infection, gastrointestinal infection, and venereal disease.

Wild Quinine is currently being used with great success by hundreds of herbalists throughout the United States and Europe for diseases such as lymphatic congestion, colds, ear infections, sore throats, fevers, infections, and Epstein barr virus. The tops of the plant have a "quinine-like" bitterness and are used to treat intermittent fevers.
This earned the plant one of its common names, "wild quinine."

Parthenium has been studied in scientific laboratories and clinics across Europe. Findings from these studies indicate that this herb stimulates the immune system. This herb also contains the four sesquiterpene esters which include: echinadiol, epoxyecinadiol, echinaxanthol, and dihydroxynardol. These constituents increase the ability of the blood cells to digest foreign particles and aid in the stages of healing wounds in living organisms. It appears to be a liver-stimulating bitter that promotes blood detoxification; thus the common name "snakeroot."

Parthenium has also been shown to both mobilize and activate natural killer cells and other immune cells. Wild Quinine herb has been commonly sold as (or mixed with) Echinacea purpurea for more than 50 years. They are both in the sunflower family and their roots bear an uncanny resemblance to each other. Many people have been using these parthenium products, however, and receiving benefits.

Wild Quinine is a perennial native of Eastern North America found growing in prairies, rock outcrops, waste places and roadsides from Maryland to Minnesota and Georgia, as far west as Wisconsin and Arkansas.

Wild Quinine grows to a height of about three feet and has alternate, long rough, hairy, serrated and lancolate, leaves that are often over a foot in length at base. Leaves grow smaller and more sessile, as they ascend up the rough, round, stem, which branches at the flowers top. The flowers bloom from June to Aug. they are small, white and daisy-like, having 5 tiny white rays or petals and growing in numerous clusters, appearing to be an unorganized umbelliferae. Wild Quinine has large, swollen, dark brown roots it grows first vertically and then may expand horizontally. Collect flowering tops and roots, dry for later herb use. It is not edible.

European settlers of the Midwestern United States discovered this herb to be used for coughs and sore throats by the Native Americans. The Catwbas tribe used its fresh leaves as a poultice on burns as well.