The following information is based on historical uses found in herbal lore and unscientific claims. There is insufficient research on this herb to prove benefits or safety issues it may have in humans.

Black Cohosh, a giant member of the buttercup family, is a woodland plant native to North America. Native American and Chinese herbalists have traditionally used black cohosh for a variety of ailments. Currently, people use Black Cohosh as a dietary supplement for hot flashes and other menopausal symptoms, as well as menstrual cramps and premenstrual syndrome, and to induce labor.

Black Cohosh is believed to be useful for treating a range of other complaints; including tinnitus and high blood pressure. The fresh flowers have a strong odor and are effective insect repellents, thus the alternative name Bugbane.

CAUTION: Large doses of Black Cohosh can cause poisoning. In 2007, the Australian Department of Health began requiring that products containing black cohosh carry the following label statement: “Warning: Black cohosh may harm the liver in some individuals. Use under the supervision of a healthcare professional” [29]. In 2008, the U.S. Pharmacopeia (a nonprofit standard-setting organization for foods and drugs) recommended labeling black cohosh products with the following cautionary statement: “Discontinue use and consult a healthcare practitioner if you have a liver disorder or develop symptoms of liver trouble, such as abdominal pain, dark urine, or jaundice” [30]. However, the U.S. Food and Drug Administration does not require such a warning on black cohosh product labels.

60 years of Cimicifuga racemosa medicinal products : Clinical research milestones, current study findings and current development."The first placebo-controlled study emerged 1986. From 2000 to 2015, a total of 28 clinical studies in Europe, America and Asia were published on the efficacy of CR. In these studies, 11,073 patients received a CR-based medicinal product, 93% thereof iCR. A meta-analysis of all nine placebo-controlled studies published until 2013 confirmed the reliable efficacy of CR-based medicinal products for menopausal symptoms." 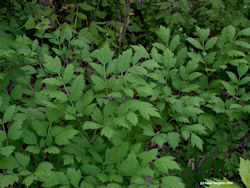 Black Cohosh is an endangered herb plant. Only the cultivated herb should be used.  Do not harvest Black Cohosh plants or roots from the wild.

Black Cohosh is a native North American perennial herb, found from southern Canada to the Appalachian Mountains and as far south as Georgia and Missouri. It grows mostly on hillsides and in open woods in moist rich soil. Black Cohosh grows to about 8 feet tall and bears a handsome long plume of white flowers from June to August. The leaves are pinnate and compound with irregular tooth leaflets. The rootstock is knotty and scared with old growth. The rhizome of the root is black and rough, Cohosh is a Native American word for rough, hence Black Cohosh.

How to Grow Black Cohosh

Black Cohosh is a hardy perennial in shaded areas to zone 3.  Grow in shaded areas, sometimes requires watering to thrive which makes it an excellent choice for a shade garden. Sow seed 1/4 inch below soil surface in a flat in the late Summer. Plant in rich, moist ground in Spring. Easily propagated by division. Black Cohosh prefers humus rich soil, like that found in the woods. It will self sow its seed and can grow into big patches under the right conditions.

Black Cohosh root was used by Native Americans to treat snake bite and as a ceremonial herb to bring visions. The root was thought by some early American settlers to be the main ingredient in witches brew, and any female caught with it in her possession was burned as a witch.

How to Harvest and Use Black Cohosh

Gather Black Cohosh rootstock in the fall after the fruit has formed. Wash roots carefully, blot with paper towel or absorbent cloth. Dry in a well ventilated area away from smoke, pets and pests, preferably on wire racks or screens.

Black Cohosh Decoction: Add 2 tsp. dried rootstock to 1 pint of water, boil and let cool. Give 2 to 3 tbsp. up to six times a day.