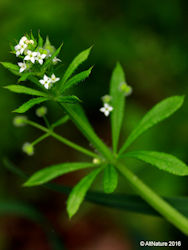 Warning: Fresh Cleavers plant can cause a severe contact dermatitis for some people. Wear gloves and long sleeves when harvesting Cleavers. Strain infusions and tinctures of uncooked Cleavers carefully to avoid throat irritation.

Cleavers Herbal Use and Possible Benefits

The Cleavers plant has a long history of use, often utilized by herbalists as one of the primary blood and lymph system "cleansing" herbs. It is considered a diuretic, so one should keep well hydrated if using this herb.

The following information is based on historical uses found in herbal lore. There is insufficient research on this herb to scientifically prove any medical benefits in humans.

In herbal tradition, it is believed that many irritating skin conditions are due to toxins in the blood that are well served by "cleansing the system." Cleavers is often taken to treat skin problems such as seborrhea, eczema, and psoriasis. The fresh plant or juice of Cleavers herb is used as a poultice for wounds, ulcers and many other skin problems. If only dried herb is available, it can be made into an infusion, decoction or tincture. Some herbalists say that it is better to use juice from the plant, but I can't see that it would yield much.

Cleavers herb is considered a cooling and detoxifying agent in serious illnesses such as cancer, but consult your oncologist before using this herb. Cleavers could be regarded as a milder remedy than Pokeweed, which is also used for such purposes but is considered to be toxic. It may have a slight laxative effect and stimulate the lymphatic system. An infusion has shown to be of possible benefit in the treatment of glandular fever, tonsillitis, hepatitis, and cystitis and has also used to treat liver, bladder, and urinary problems. You should always discuss such conditions with a physician, as well as your use of any herbal remedy.

Cleavers is said to be good for the hair, making it grow long when an infusion is used as a rinse. Several Native American Tribes used an infusion of the plant for gonorrhea. Cleavers was also believed to remove freckles.

The Cleavers plant is edible raw though said to be unpalatable. It is mainly used as a pot-herb or as an addition to soups. Using the plant as a vegetable is supposed to have a slimming effect on the body.

Cleavers seed is one of the best coffee substitutes, it merely needs to be dried and lightly roasted and has much the same flavor as coffee. 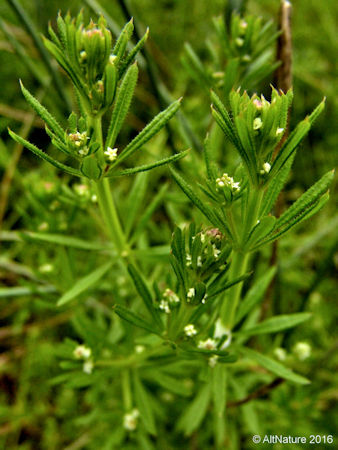 Cleavers is a worldwide native annual whose original origin is debatable. It is common in Australia, Britain, China, Europe, France, Iraq, Mexico, Spain, Turkey, and the United States. Cleavers herb can be found growing in hedgerows, woods, fields, among cultivated crops, and in waste places, in sparse woods at the base of trees, and around buildings which it will often use as a means of support to grow upward.

The stems and leaves of Cleavers are covered with little-hooked bristles, which attach to passing objects, in this way it fastens itself to adjacent shrubs, to climb its way upwards through dense undergrowth into daylight, often forming matted masses. Leaves are narrow, lance-shaped and are rough along the margins and surface, with the prickles pointing backward. They occur in whorls of 6 to 8 leaves, around and along the square, weak, branching stem which may grow to 6 or more feet in length. The flowers are white, tiny, 1/16 to 1/8 inch in diameter and star-like, growing in a stemmed bud rising from the leaf axils and arranged in clusters or whorls, six or eight together, blooming separately, 2 or 3 at a time, so flowers and seeds are present in each cluster. The seeds are little round vessels, covered with hooked bristles and readily clinging, to whatever they touch, ensuring dispersal of the seeds.

Note: Some species of Cleavers produce only 2 or 3 flowers and seeds to a cluster. Flowers bloom April through Sept. 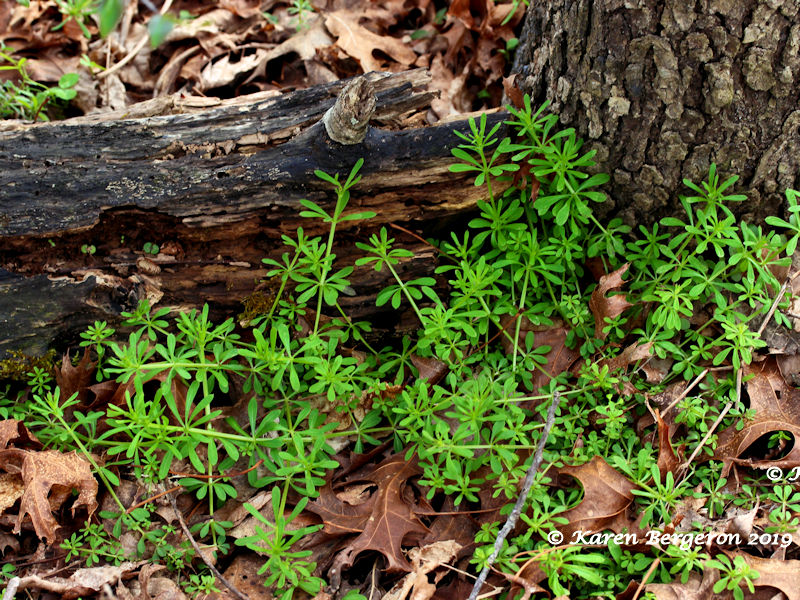 How to Grow and Harvest Cleavers Herb

Cleavers is very easy to cultivate. It prefers a loose moist leafy soil in partial shade. This plant does not really need any help to reproduce itself and can be invasive. It provides food for the larvae of many butterfly species.

Gather the above ground plant, being careful not to gather whatever it touches. Unless you are sure that you aren't allergic the the fresh plant, wear gloves and long sleeves to harvest. Apparently, the dried plant is safe but still use caution at first. Dry for later herb use, should be picked through before drying to ensure herb is contaminant free.

Cleavers was used as a love medicine by one Native American tribe. The infusion of plant was used as a bath by women who wished to be successful in love. A red dye is obtained from a decoction of the root, it is said to dye bones red.

Gerard writes of Cleavers as a marvelous remedy for the bites of snakes, spiders and all venomous creatures. A thick mat of the stems, when used as a sieve for filtering milk, was said to give healing properties to the milk and is still used in Sweden for that purpose.

Galium Aparine as a Remedy for Chronic Ulcers